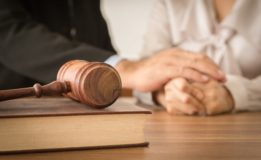 A Florida appeals court stood by its own precedent Wednesday in finding that the widow of a mesothelioma victim cannot recover damages for pain and suffering as a “surviving spouse” under the state’s Wrongful Death Act because their marriage followed the victim’s injury but ruled that his two surviving children can, under the circumstances.

The ruling from the Fourth District affirmed a Broward County trial court’s granting of a judgment on the pleadings as to the widow, Jennifer Ripple, in favor of the defendants, who include corporate heavyweights CBS Corp., General Electric Co., The Goodyear Tire & Rubber Co. and several other manufacturers of products that contained asbestos that allegedly caused Richard D. Counter’s illness and death.

However, the appellate panel also found the trial court erred in later granting the manufacturers’ motion for summary judgment against Counter’s two daughters, based on what the judges agreed was an “irreconcilable contradiction” in the defense’s arguments.

In reaching its decision regarding Ripple, the Fourth District affirmed its own 2017 decision in Kelly v. Georgia-Pacific LLC, but it also certified a conflict with the Fifth District’s 2018 decision in Domino’s Pizza LLC v. Wiederhold, in which its sister court expressly disagreed with Kelly.

Counsel for the estate told Law360 that, while the court granted their side a partial reversal, they intend to seize upon that conflict and appeal the ruling against Ripple to the Florida Supreme Court.

“Today’s opinion represents a significant victory for Florida families,” Mathew D. Gutierrez of The Ferraro Law Firm said. “It paves the way for the Florida Supreme Court to review the Fourth District’s holding in Kelly, which eliminated an entire category of ‘surviving spouses’ who are eligible to recover loss of consortium damages under Florida’s Wrongful Death Act. The opinion also ensures that the Kelly holding is not extended to preclude recovery by surviving adult children.”

The panel explained that the Kelly decision focused on the question of whether the Florida Wrongful Death Act supersedes a common law requirement that a spouse must be married to the deceased individual before the date of the decedent’s injury to recover for loss of consortium.

The Fourth District determined in that case that there was no legislative intent for the Wrongful Death Act to change the common law, based on precedent set by the Florida Supreme Court in Thornber v. City of Fort Walton Beach, in which the high court said, “The presumption is that no change in the common law is intended unless the statute is explicit and clear in that regard.”

In addition to finding the language in the Wrongful Death Act included no “explicit and clear” change to the common law, the court also found the law’s restrictions and the common law requirements could coexist.

“Our holding and reasoning in Kelly applies equally to the instant case,” the panel said Wednesday.

According to the opinion, Counter was diagnosed on May 22, 2015, with mesothelioma, which can be caused by inhaling toxic asbestos. Counter married Ripple on July 4, 2015, and on July 23, 2015, he filed a personal injury suit alleging the defendants’ products were the source of asbestos exposure he experienced from the 1950s through the 1990s while serving in the military, working in industrial plants and at home.

Counter died on Nov. 1, 2015, and Ripple moved as the personal representative of Counter’s estate to amend the suit as a wrongful death case. She sought to recover damages for loss of companionship and protection and for mental pain and suffering, or alternatively for Counter’s two daughters to recover for lost parental companionship, instruction and guidance and for mental pain and suffering.

The panel also explained that it disapproves of the Fifth District’s decision in Domino’s because that court did not even mention Thornber and instead looked at the Wrongful Death Act in isolation.

“Domino’s potentially opens a wide door to a future case in which a person, not necessarily involved in a relationship of love and affection with the injured person, is permitted to ‘marry into a cause of action’ simply by marrying the injured person before the injured person’s death, and thereby become the decedent’s ‘surviving spouse’ in order to recover damages under [the Florida Wrongful Death Act],” the panel added.

In a concurring opinion, Judge Jonathan D. Gerber noted that the facts of the Kelly case resulted in an unfortunate situation where a widow was unable to recover for loss of companionship and pain and suffering, despite her husband’s injury being latent for decades of marriage, but he stressed that any changes to the Wrongful Death Act must be made by the legislature.

“I am hopeful that this will be the beginning of the end of the tragedy created by the Kelly case,” Ripple’s counsel Juan P. Bauta told Law360.

Regarding the trial court’s summary judgment against Counter’s daughters, the Fourth District agreed with the estate that the defendants cannot rely on their argument that Ripple was not Counter’s “surviving spouse” under one section of the Wrongful Death Act and then argue that she is under another section to block the daughters’ ability to recover damages.

“As the estate further argued, the defendants’ contradicting positions ‘cannot be harmonized,'” the panel said, likening the situation to the doctrine of judicial estoppel. The panel acknowledged that the situation in this case differs from the Florida Supreme Court’s definition of judicial estoppel as preventing litigants from assuming totally inconsistent positions in separate judicial proceedings.

“However, we consider that distinction to be insignificant in this case, because the prejudicial effect is the same,” the panel said.

“Again, the defendants cannot engage in such an ‘irreconcilable contradiction,'” the panel added. “Their attempt to have the circuit court reconcile the contradiction by describing the decedent’s wife as a ‘surviving spouse, albeit a spouse who is herself barred from recovery pursuant to Kelly,’ essentially attempts to impermissibly rewrite section 768.21 by adding those words to the statute. This we cannot do.”

PrevPreviousHow to Build a Powerful Personal Brand in the Attention Economy
NextWant to Use Referrals to Build Your Practice? Focus on 3 Types of RelationshipsNext