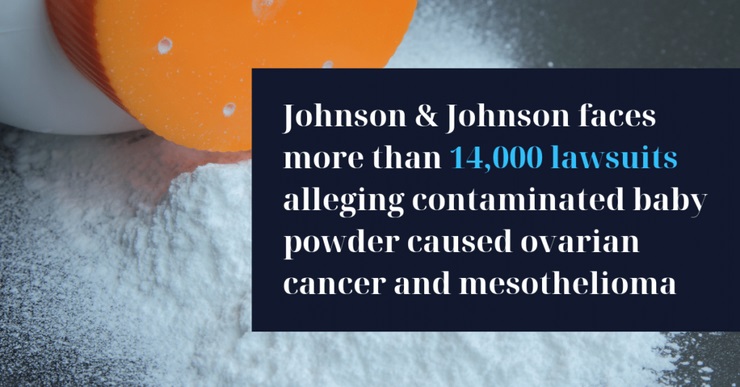 Among the recent documents unsealed in court indicates that in May 1974, an official at Johnson & Johnson’s Windsor mine in Vermont recommended “the use of citric acid in the depression of chrysotile asbestos” from talc extracted from the site.

“The use of these systems is strongly urged by this writer to provide protection against what are currently considered to be materials presenting a severe health hazard and are potentially present in all talc ores in use at this time,” the mine’s director of research and development wrote then.

Johnson & Johnson stock — up 6 percent for the year — plunged 11 percent on news of the report, based on memos, internal documents and confidential memos that the maker of Johnson’s Baby Powder had been compelled to share with attorneys for some 11,700 plaintiffs who claim the company’s powder products caused their cancers. The cases include thousands of women with ovarian cancer.

Johnson & Johnson is facing thousands of lawsuits across the country including in a federal multi-district litigation in New Jersey, see Johnson & Johnson Talcum Powder MDL 2738 (USDC New Jersey). This litigation is related primarily to the ovarian cancer claims brought by women, who claim that J&J talcum powder products cause ovarian cancer, which combined with the emerging talc mesothelioma lawsuits, would open an entire new area of mass tort litigation for J&J and its affiliates to defend.

Any exposure to asbestos is a health risk, according to the World Health Organization and other medical groups.  ompany documents, along with deposition and trial testimony, show that from at least 1971 to the early 2000s, tests showed small amounts of asbestos could sometimes be found in the company’s raw talc and finished powders, Reuters reported.

At the same time, company executives, mine managers, scientists, doctors and lawyers worried about the problem and how to address it but did not disclose the issue to regulators or the public.

An examination of the documents also revealed how J&J succeeded in curbing regulators’ plans to curtail asbestos in cosmetic talc products as well as scientist research on talc’s health effects, Reuters stated.

Johnson & Johnson denied reports in a statement to the Associated Press. J&J said “thousands of independent tests by regulators and the world’s leading labs prove our baby powder has never contained asbestos.”

The New Brunswick, New Jersey, company  also has publicly maintained in recent years there is no science to back alleged links between its powder and cancer. J&J has won several recent court cases alleging liability and damages, and is appealing other judgments, including $4.6 billion awarded in July to 22 women who claimed its product caused their ovarian cancer.

J&J dominated the talc powder market for more than a century, with its talc products adding $420 million to the company’s $76.5 billion in sales in 2017. While contributing a relatively small portion to overall revenue, Johnson’s Baby Powder is seen as a major component of J&J’s image as a caring company — a “sacred cow,” as one 2003 internal email cited by Reuters put it.

The debate over talc began decades ago. In the early 1970s, scientists discovered talc particles in ovarian tumors. In 1982, Harvard researcher Daniel Cramer reported a link between talcum powder and ovarian cancer. His study was followed by several more finding an increased risk of ovarian cancer among regular users of talcum powder. Cramer, who at one point advised J&J to put a warning on its products, has become a frequent expert witness for women suing the company. J&J ignored and suppressed Mr. Cramer’s attempts to show them the study data then publicly declared this research as flawed, which J&J still continues to this day.

DOES J&J TALCUM POWDER CAUSE CANCER?

Johnson & Johnson has been ordered to pay nearly $1 billion in total damages after just 5 trials, alleging its baby powder is causing ovarian cancer, all jury verdicts have been in state courts in Missouri and California, see J&J Talc Trials St. Louis Missouri.

Talc, a mineral composed of magnesium, silicon, oxygen and hydrogen, is used extensively in cosmetics and personal care products. Women sometimes use talcum powder on their genital areas, sanitary napkins or diaphragms to absorb moisture and odor – contrary to the guidance of most physicians. (Asbestos, linked to lung cancer, was once an impurity in talc, but it has been banned for several decades.)  J&J is notorious for using any means possible to influence scientific data and opinion as well as manipulating research reports and public media commentary by industry experts. The recent California trial showed payments made to previously perceived impartial Science Council members, who were declaring publicly that J&J talcum powder does not pose a cancer risk, the Los Angeles jury did not agree with J&J and other pro-talc defense team members, as over $300 million of the total $417 million judgment was for punitive damages, usually awarded for intentional misconduct, see “New Evidence of Johnson & Johnson Bad Conduct Moved LA Jury to Award $417 Million Talc Verdict”.

His studies and the many others that have found a relationship used a case-control approach. A group of women diagnosed with ovarian cancer and a group without it were asked to recall their past diet and activities, and the results were then compared.

Critics say these kinds of studies have serious drawbacks, particularly “recall bias.” Women may forget what they did or, if diagnosed with cancer, might inadvertently overestimate their use of a suspect substance. People without a serious disease may be less motivated to remember details.

Three other studies – considered cohort studies – did not find any overall link. Unlike the case-control studies, these efforts began with a large group of women who did not have cancer and followed the progress of their health, with participants recording what they were doing in real time. The results of this approach, most scientists say, are stronger because they aren’t subject to the vagaries of memory.

One such study included more than 61,000 women followed for 12 years as part of the National Institutes of Health’s well-respected Women’s Health Initiative.

WILL “MESOTHELIOMA TALC” BE THE NEW MASS TORT?

In 2015, another Los Angeles jury awarded Judith Winkel $13M against Colgate-Palmolive for mesothelioma allegedly caused by exposure to talc in its baby powder. The jury rejected Colgate and its experts’ claims that the cosmetic talc at issue was not contaminated by asbestos and that the talc in question were non-fibrous “cleavage fragments” unlikely to be inhaled or embedded in the lungs. Although details of the trial are not readily verified, at least one report indicated that evidence presented at trial showed that the talc contained 20% asbestos fibers.

These cases are particularly important because the defendants were held responsible for cosmetic talc containing asbestos and for having caused mesothelioma and not ovarian cancer as in the earlier J&J talc cases. Further, both juries found that the defendants acted with malice. However, the cases were confidentially settled before the respective punitive damage phases.

Will “Talc Mesothelioma” be the next mass tort against Johnson & Johnson and its affiliates? Mass Tort Nexus will continue to report on this as additional information becomes available.

PrevPreviousRecalls Underway for Zantac and Axid Antacids Because of Cancer Impurity
NextAttacking and Lying, Johnson & Johnson is Battered by Talcum Powder – Cancer LitigationNext